Why I have to sing Sacred Harp – personal experiences from Ulrike

I’ve fallen in with a bunch of crazies. Sitting there in the basement of a church congregation around an empty square, waving their arms and singing Christian songs with lyrics that essentially glorify death and the life hoped for afterwards. Yet most of the people here are at least agnostics, if not decided atheists like me.

For about two years now I have been part of an international musical community whose European members often jokingly refer to themselves as a “sect”. And sometimes have the faint suspicion that they really are one. (But don’t worry, we don’t want your money, and you are welcome to believe whatever you want, it’s none of our business!)

For me all this started about two years ago with a look at YouTube (praise be to the World Wide Web!), more precisely the trailer of a documentary film called “Awake, My Soul”.

There you can hear four-part singing; later I learn that the song is called Idumea at the very beginning and is strenuously high for the alto (at least for me). This music shocks me immediately, grabs me in my innermost being, so to speak. And Am I born to die, to lay this body down, and must my trembling spirit fly into a world unknown…! This song has changed my life. I am not prone to pathos. I am a rather unemotional person, apart from a great enthusiasm and a tendency to sudden violent stress reactions. I have a decidedly schizoid personality structure. But with Sacred Harp I make an exception!

Meanwhile I sing this wonderful music every Thursday with a slowly but steadily growing group in Bremen; whenever possible (much too seldom!) I go to singings where singers from England, Ireland, Scotland, Poland, USA, France and Germany meet and together create a sound that sweeps us all away like a tsunami with friendly intentions. Back in Bremen with my small group I have to get used to the thinner sound again with great effort, but again and again I am enthusiastic about this small group of people with the most different musical backgrounds, from the professional violinist to the “I can’t sing, but I always wanted to join a choir” type.

Musicians and musical amateurs, maybe even really unmusical singers in a choir, is that possible?

Probably not. But we’re not a choir.

SACRED HARP IS NOT A CHOIR!!

Now would be the moment to explain what it is that so engrosses me about this music, but I can’t explain it to myself. I sang in a “normal” choir for many years; that was also very beautiful and enriched my life immensely, but Sacred Harp seems to be another dimension of the musician’s life. By the way, this is also reflected in the phenomenon that there seem to be hardly any people in Bremen who find Sacred Harp “quite nice”. There are the completely enthusiastic and those who very quickly take flight.

The music is partly pentatonic, which is obviously understood in every culture worldwide. Maybe it’s something archaic that docks in the right places in the brain?

We sing loudly, “on top of our voices” (which leads to a release of endorphin and oxytocin, neuroscientists claim), and without much fine-tuning. That doesn’t mean that we don’t care about the beauty of the songs, but Sacred Harp is not practiced. Sacred Harp is sung. And I hope very much that I can sing this wonderful music for a long time to come. 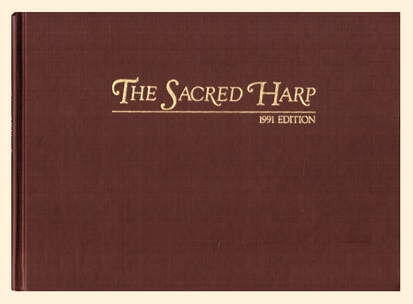