Well, which one? Sacred Harp offers several possibilities; men can sing bass, tenor or treble, women tenor, alto or treble. But what are we talking about here, what does it mean when a woman switches from alto to tenor or a man from tenor to treble? A picture says more than a thousand words, let’s have a look. 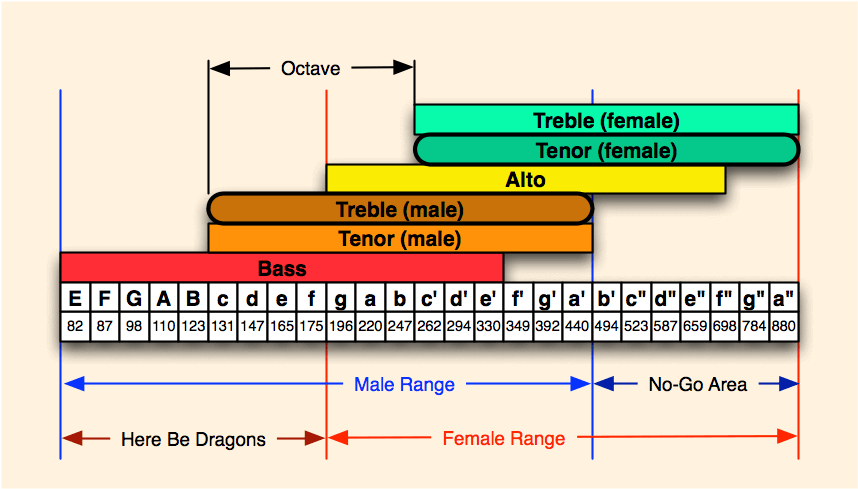 On the left are the low notes, on the right the high ones. On the left the men, on the right the women. If you look at the sexist coloured arrows you can see that there are acoustic “No Go Areas” for each sex. No problem for the guys, they usually avoid squawking way up high, above the Michael Jackson region. But the girls have a “problem zone”. Yes, another one. Read on, we’ll get there.

What do the rounded text boxes mean? Well, when a man sings the treble part, he is singing an octave (eight notes) lower than the ladies next to him. A woman usually sings the tenor an octave higher than the men, unless she has an exceptionally low voice. This is quite rare.

Many inexperienced singers run into a trap here. They make their first steps with the voice to which they are accustomed all their lives, namely with their speaking voice. This might work well in a quiet room – it feels comfortable and wouldn’t disturb the neighbours – but even in a group of four that voice is completely overwhelmed. In this range the human voice has no pressure, no projection; the real power comes a whole octave (eight notes) higher. Take a look at the following diagram (copied from “Musik im Kopf” von Manfred Spitzer). 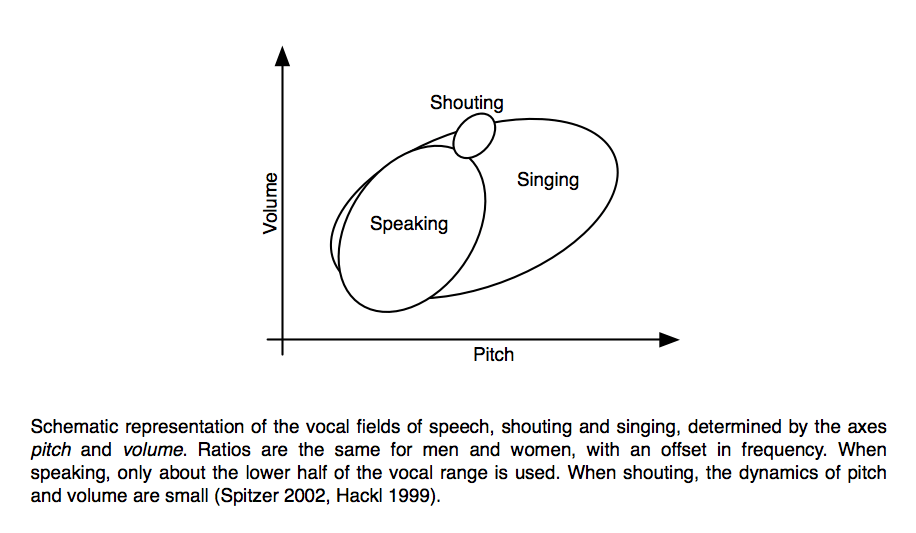 It can be summed up simply: Loud = high, high = loud. We’ll practice that in a moment, be patient.

First, as threatened, to the girls’ problem zone:

Let’s look at the diagram at the top… oh, here it is again.

The tenor voice in the male range (second bar from below, orange) is inappropriate for almost all women, because it reaches into the left No Go Area. It is comfortable for women alone in the living room, but inaudible in the group. The tenor voice in the female range (green), on the other hand, is in the same range as the treble, i.e. about half an octave higher than the alto, it goes to the upper limit; not every woman’s thing. Most women (about 80%) are natural alto singers – to begin with, at least. For some, this will change – with practice (or, ahem, age) the voice can increase its range. And maybe you belong to the remaining 20%. Switch between alto and tenor, try it out, feel where your voice sits best. If you find the tenor comfortably low, then you’re almost certainly doing something wrong and belong in the alto. Even if it seems exhaustingly high to you – singing should not feel effortless (even though some strong singers may outwardly appear to be using little effort). Effortless = powerless. It’s an input-versus-output thing; none of this just happens by itself. It’s simply more fun, more rewarding, to be able to sing loud.

Are you following so far? Then let’s do an exercise and read the following line. Repeat after me:

Now we take one of these “Fa “s, stretch it out, longer and louder, but keeping the pitch the same:

Well, that wasn’t very loud, was it? Now from this Fa, climb up the scale to the next Fa, and the one above that:

Last “Fa” feels high, doesn’t it? Never mind, take a deep breath, aim for that high note again, and turn the volume up to 11. Go on, give it some welly:

There’s the power. And you can probably get four or five notes above it; maybe even more. Try it out, even if the cat gives you a funny look and the neighbours start knocking.

The next diagram is hardcore, a bit more advanced. On the left hand side you can see the ranges of the individual voices and the position of the beginning notes in an example from the book. You can click on it to enlarge it. It might be worth meditating on it for a while.